Welcome to NodeBox! In this tutorial we’re going to learn the essentials for working with the program.

If you haven’t done so already, you should download NodeBox first.

To install on Windows, double-click the installer and walk through the steps. On Mac OS X, drag the icon to your Applications folders (or anywhere you like).

Open the application. After a short loading time, NodeBox opens a new document window that looks like this: 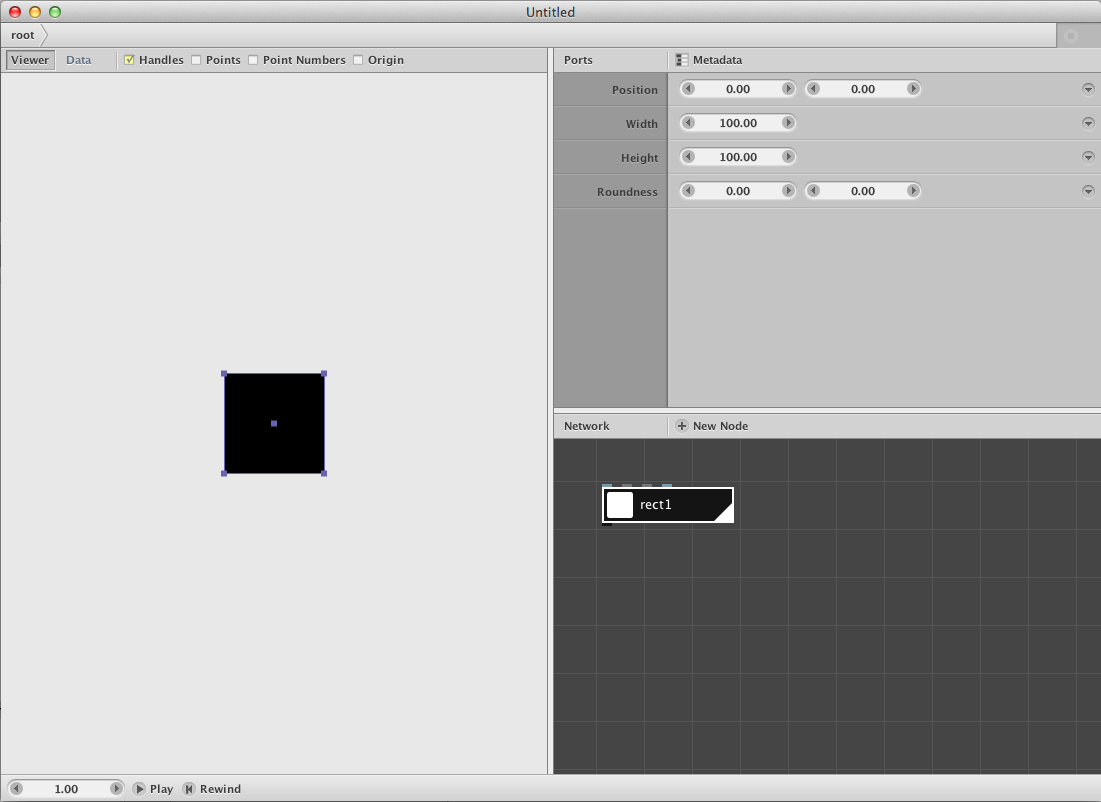 NodeBox documents are composed of networks of connected nodes.

Remove the default rect node by selecting it and by entering the backspace button.

Click the New Node button or double-click anywhere in the network pane. This brings up the node selection dialog:

From this window you can create an ellipse node. There are three possible ways: 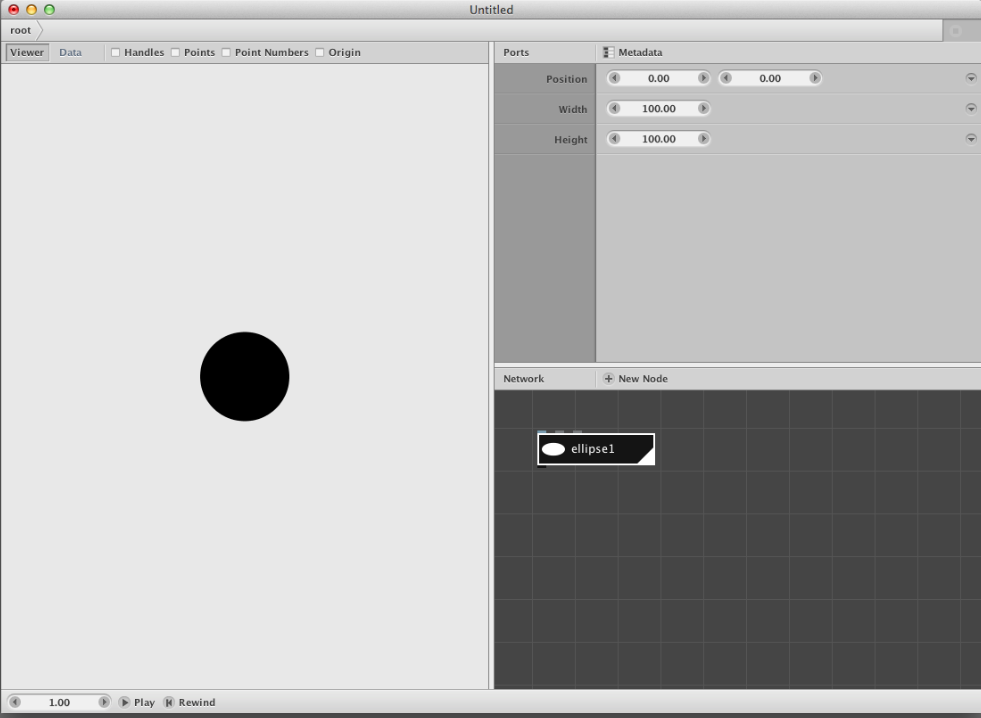 The NodeBox document window consists of three panes. These are (clockwise, from the top):

NodeBox named the new node “ellipse1”. That’s because each node in NodeBox needs to be uniquely identifiable. 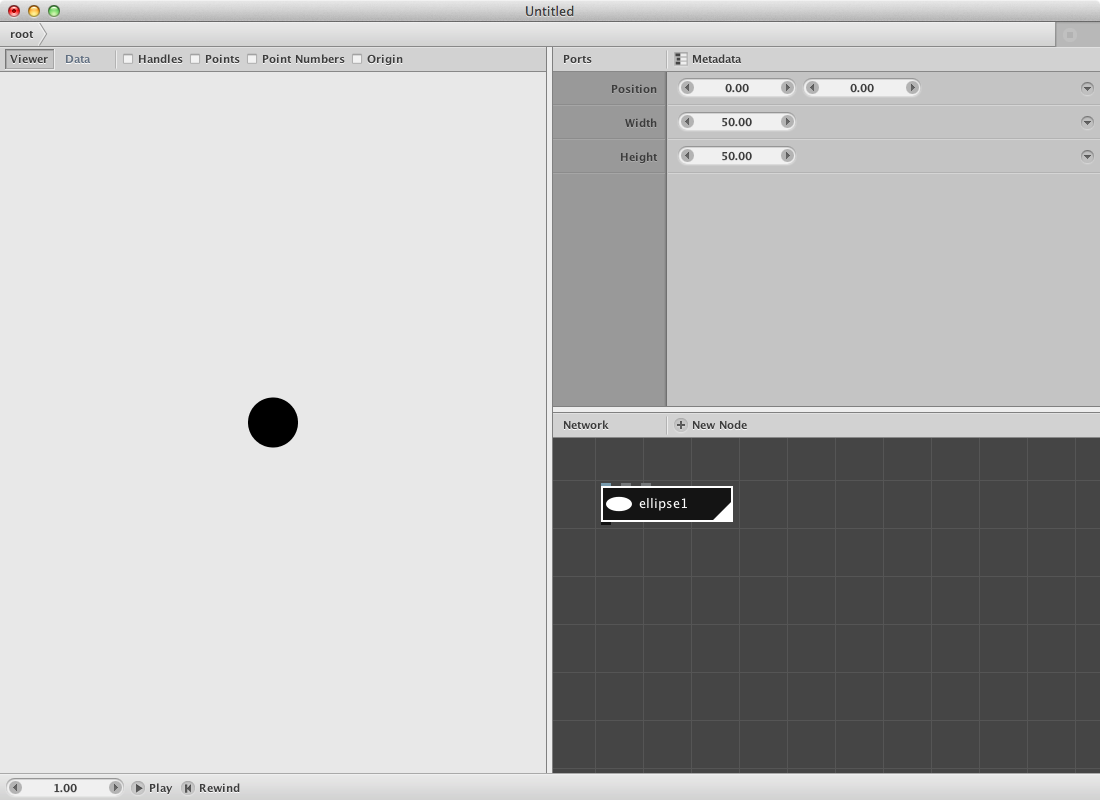 Everywhere you see a number, you can drag it to see what it does. If you make a mistake, you can undo it (Cmd+Z on Mac or Ctrl+Z on Windows/Linux).

The power of NodeBox comes from connecting nodes together. Nodes are connected using their ports. Each node has one output port and zero or more input ports. In this simple example, we’re going to put shapes on the points of a grid.

Click the New Node button again, and choose the grid node. Double-click it to place it in the network. 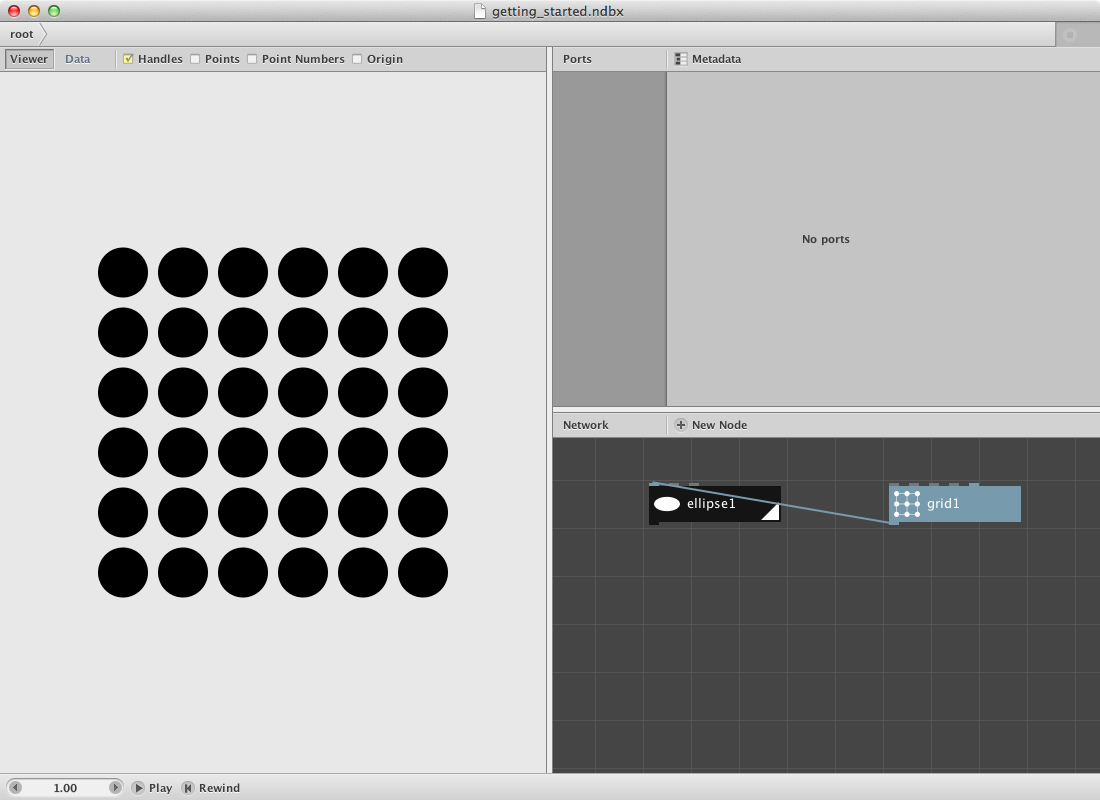 NodeBox can only show the output of one node at a time. We see the output of this rendered node in the viewer pane. Currently, ellipse1 is the rendered node, this is indicated by the little white triangle in the right corner of the node.

We can view at the results of one node while working on the parameters of another one. We’ll keep the ellipse1 node rendered while selecting the grid1 node (click on it once).

We’ve just updated the grid1 node, but we’re still looking at the results of the ellipse1 node. This means the changed output of grid1 is passed on to serve as the input of ellipse1. This is the core idea behind NodeBox: nodes passing (in this case) visual geometry or other information to other nodes. 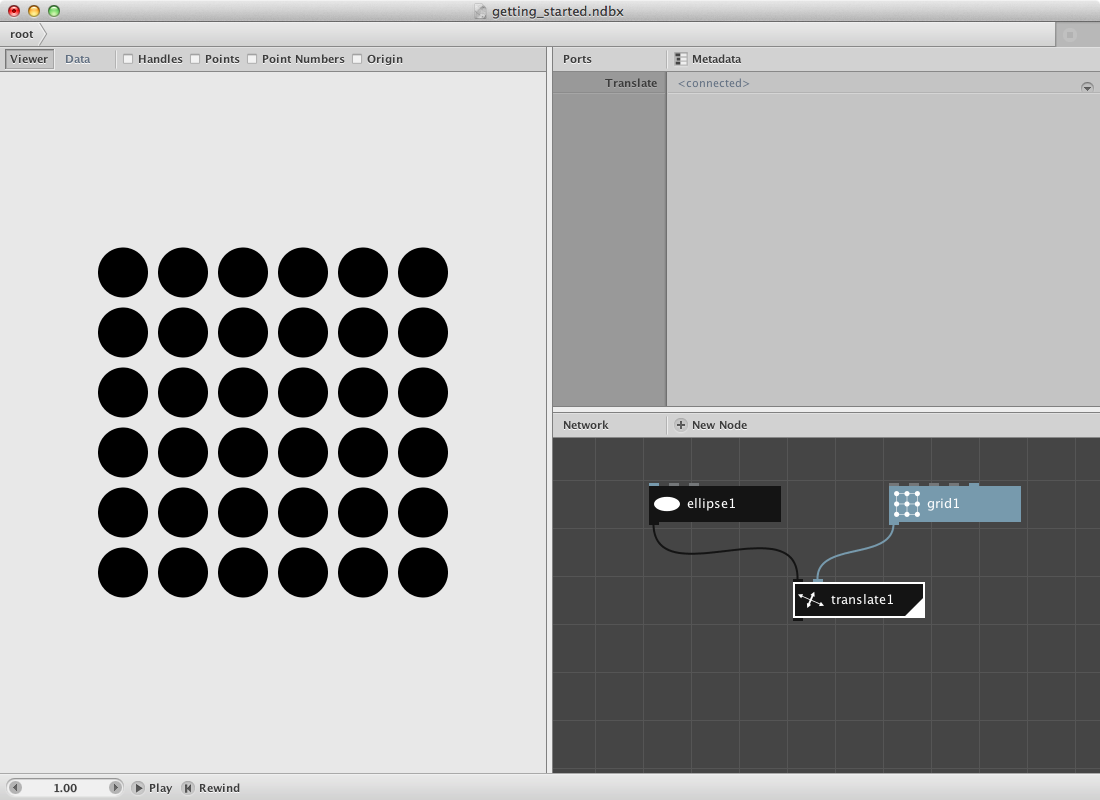 For the moment we’re drawing the same ellipse on each point of the grid1 node so let’s create some variation in size and color.

Suppose we want 4 different sizes for the ellipse and 5 different colors.

Leave all other nodes as before and double-click the translate1 node. Take a look at the result: 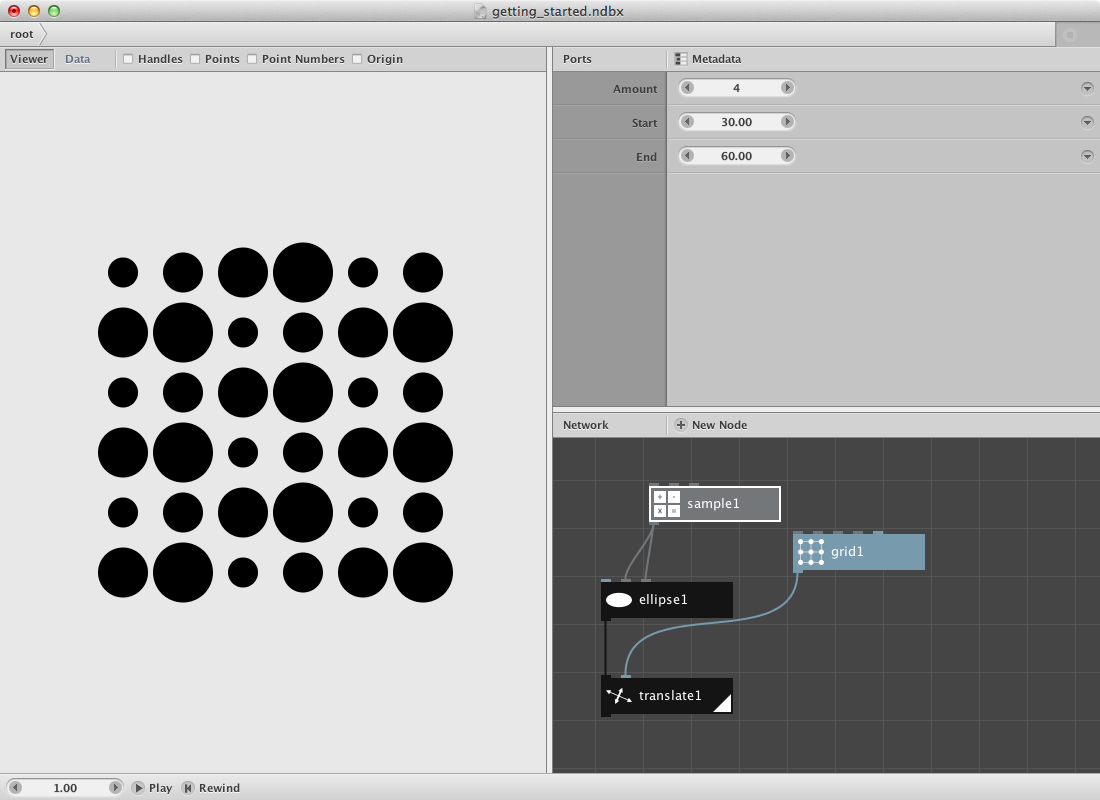 Have a look at the Nodebox Concepts page for more detailed information on this principle.

Click the New Node button again, and choose the colorize node. Double-click it to place it inside the network and position it between the ellipse1 node and the translate1 node. You don’t have to remove connections, just connect the output of ellipse1 to the shape port of colorize1 node and the output of colorize1 to the shape port of translate1. Nodebox will remove the previous connection.

Double-click the colorize1 node and click on the fill parameter: a color picker window will appear. 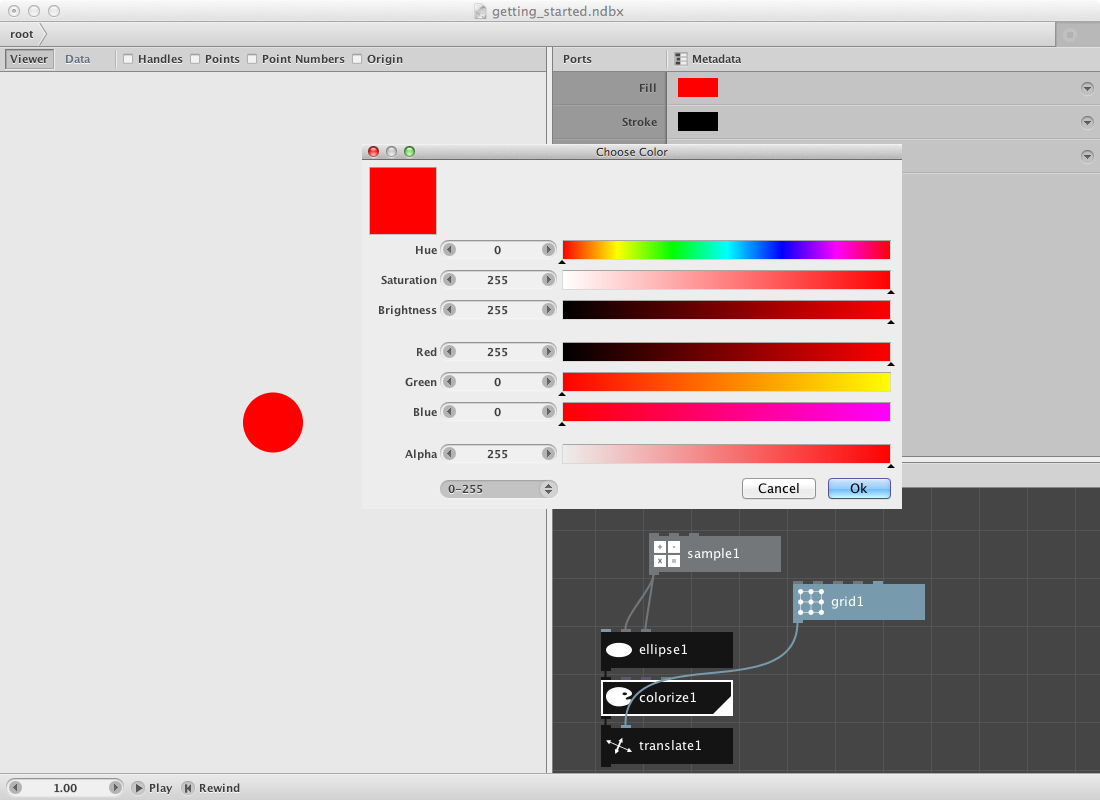 Choose a color and render the translate1 node. As a result all ellipses will have the same color.

Create a hsb color node and

Create an other sample node and 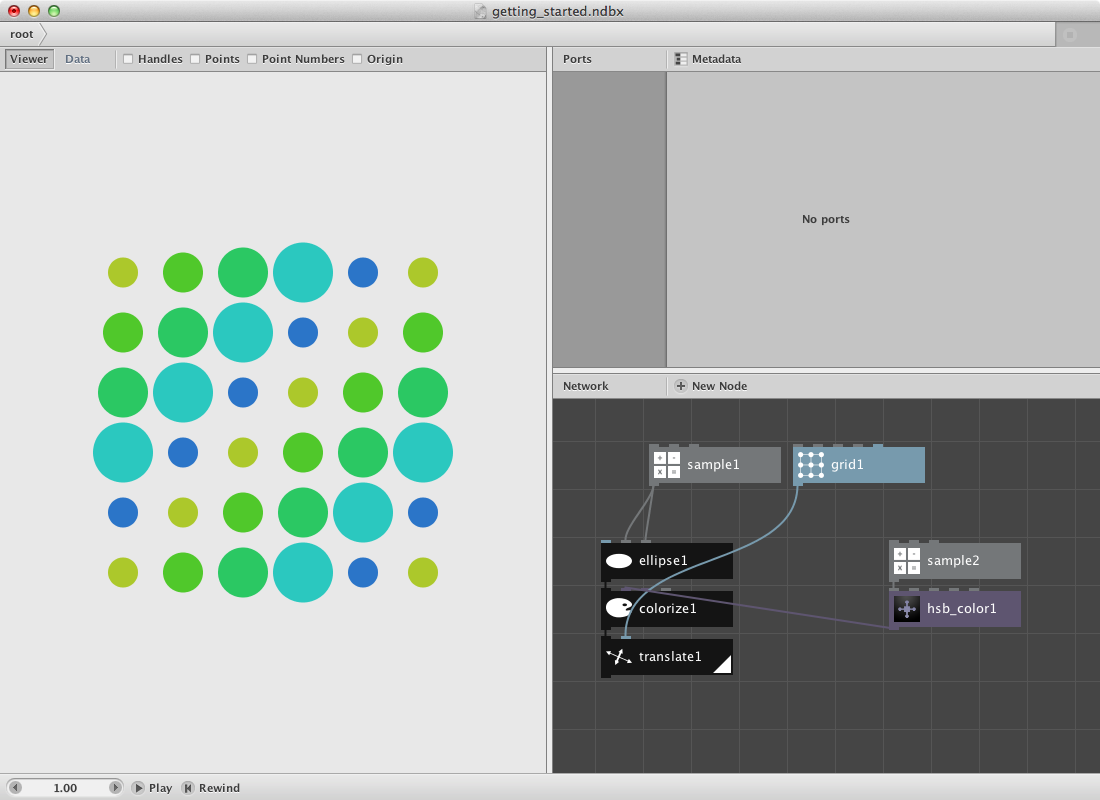 Until now we have worked with the same ellipse shape. NodeBox allows you to work with a variety of shapes. Let’s replace the ellipse1 node with a polygon node.

You should get this result: 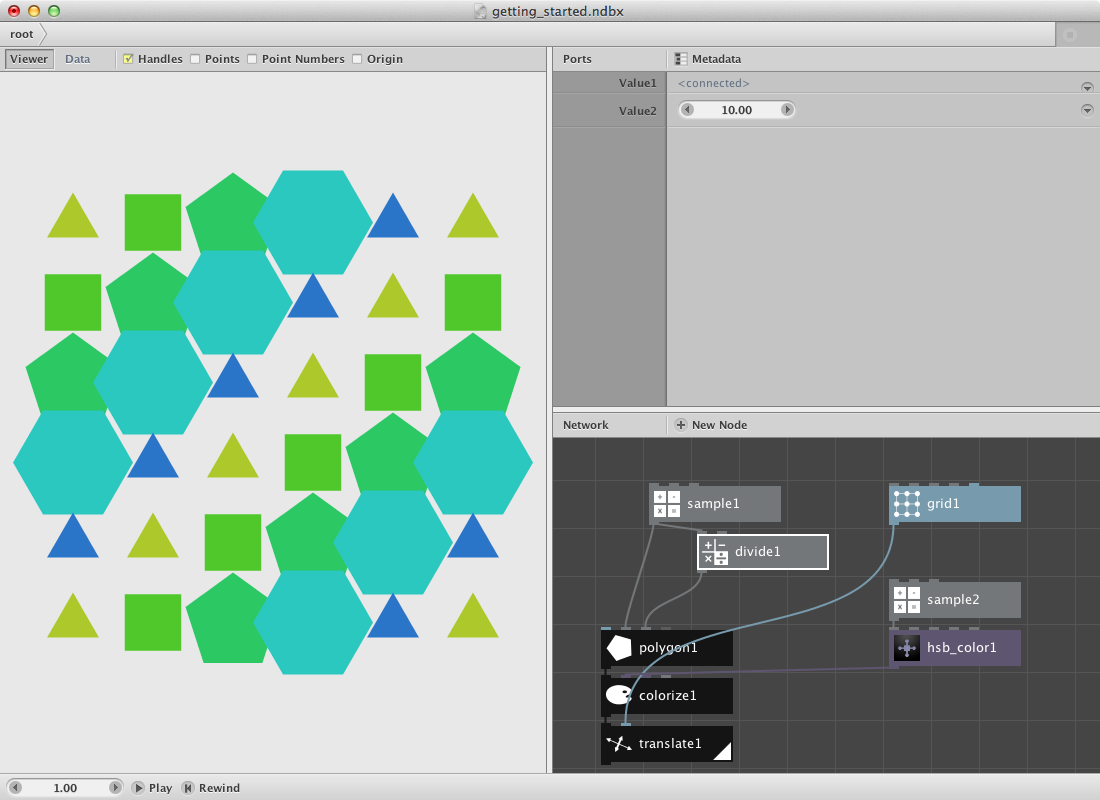 NodeBox saves documents in the .ndbx file format. These files can only be opened by NodeBox. If you want to use NodeBox compositions in other programs, export the document to PDF. You can use PDF files in other graphic programs such as Adobe Photoshop or Illustrator. NodeBox preserves all vector information so your compositions won’t be pixellated.

NodeBox will export the rendered node. In our example, if we just wanted to export one polygon, we need to double-click the polygon1 node to rendere it, then export again.

Now that you’ve seen the basics, you can: